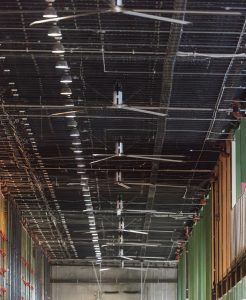 Nebraska Furniture Mart (NFM)-Texas takes the safety and welfare of its employees very seriously. In fact, the massive home furnishing store’s 1.3 million square foot warehouse and distribution center (DC) was designed from the ground up with that level of concern top of mind.

Located on the south wall of the NFM-Texas DC are six prominent architectural features that protrude beyond the DC’s main wall structure, each side featuring four receiving docks.

These large building features serve not only an aesthetic purpose but also contain 48-feet high ventilation louvers from floor to ceiling on each end that are easily opened or closed at the touch of a button.

During the hottest months of the year, NFM-Texas opens the louvers during the coolest hours of the day, which occur typically between 2 a.m. and 6 a.m. That’s when several powerful rooftop-mounted exhaust fans begin expelling hot air at the roof level while drawing in cool morning air at 36,000 cubic feet per minute (cfm) through the receiving area louvers and into the sprawling non-air conditioned DC.

“Essentially, we designed our six receiving areas in the DC as an integral part of our air rotation system,” explained Pat Evers, Process Improvement Supervisor, NFM-Texas. “Once enough cool air is drawn into the DC, we then close off the large louvers so we don’t draw any hot and more humid air that begins to form around the DC as the sun comes up.”

Cooler air requires movement and circulation
That’s when nearly 100 EPIC industrial HVLS (high volume low speed) fans strategically placed around the DC begin to do their job. With the structure now full of cooler air, it won’t benefit anyone unless it’s moved and fully circulated.

While the NFM-Texas exhaust fans decrease to a slower speed and then continue to evacuate heated air that does build up under the ceiling during the day, the HVLS fans circulate the cooler air that has sunk to floor level.

“We are adamant about exchanging the air in our facility every hour,” said Evers. “In our business, and especially with the size of our DC, volatile organic compounds (VOCs) off-gassing from such a high concentration of the various products we sell is a valid concern.”

Evers further explained that warehousing such large and concentrated quantities of items like furniture (which contain foam ingredients and particle board that off-gas carbon tetrachloride), as well as new carpet and padding (which off-gasses formaldehyde), impacts the overall air quality in the NFM-Texas DC.

Fortunately, the DC’s entire fleet of lift trucks is battery powered, so there is no issue with propane fumes in the facility. But because the lift truck batteries do off-gas sulfuric acid and hydrogen fumes during recharging, the DC does operate a special ventilation system at its main recharging station.

More HVLS fans added to cover the “autobahns”
In early 2016, NFM-Texas added 24 EPIC 24-foot HVLS fans in the drive aisles—or what NFM-Texas refers to as “autobahns”—on the DC’s north and south sides, which are each 1,500 feet in length. This has since increased the amount of air movement in the DC autobahns as well as down the DC warehouse racking aisles. Since its grand opening in early 2015, NFM-Texas has now installed a total of 98 EPIC industrial HVLS fans throughout its DC.

“After our first full year of operation, we found that the DC was still very warm in spots which is why we added the additional HVLS fans,” said Evers. “Such a move is directly connected to staff retention and keeping personnel comfortable, both of which are top priorities for us.”

“(Adding more HVLS fans) is directly connected to staff retention and keeping personnel comfortable, both of which are top priorities for us.”
– Pat Evers, Process Improvement Supervisor, Nebraska Furniture Mart–Texas, The Colony, Texas

EPIC fan lab key to decision
The largest EPIC HVLS fans move and circulate cooler air in the more expansive DC areas, while the smaller fans are located above the DC’s mezzanine and in shop and product preparation areas.

“When we first started to examine HVLS fans for our facility, we looked at several different companies out there,” Evers pointed out. “We quickly discovered that EPIC has a fan lab right here in Dallas, which obviously was very convenient for us.”  Evers said he and his team visited the fan lab and were impressed that they could not only see various Epic fans operating, but also several other manufacturers’ fans for side-by-side comparison.

“We were able to test all of the fans which provided us an excellent opportunity to compare and contrast various features and designs,” Evers said. He further emphasized that due to the sheer number of fans needed for NFM-Texas, cost-effectiveness was a driving factor. “Because the Epic fans run at 70 percent volume and draw only 1.1 amps, we easily determined that’s the direction we wanted to go.”

“Properly planning our HVLS fan placements simultaneously with our lighting plan ensured that we wouldn’t incur any annoying strobe effects while the fans are operating, which can actually make people working in those areas feel sick,” Evers explained. “Ours is also the first NFM facility to take advantage of BIM as part our design process. We were able to view 3D images of what the interior environment was going to look like well in advance to work out any potential conflicts between the fans and the lighting.”

Evers continued that BIM also assisted with fan placement in conjunction with warehouse rack autobahns. Careful attention was placed on fan placement so that lift trucks with extended masts that need to reach products on the very top of racks would not inadvertently strike the fans.

In addition to centralized control via the BMS, NFM-Texas can also control the fans by zone at the department level via the highly user-friendly iFAN. This is especially useful due to the variety of fan sizes and varying needs throughout the NFM-Texas DC. Zone control via iFAN is contributing to overall energy savings potential throughout the DC’s entire HVLS fan network, Evers emphasized.

“The HVLS fans portion of our entire NFM-Texas project certainly had its share of challenges along the way, and we learned several important lessons as a result,” Evers said. “We’re glad we had such a great team to work with. The folks at EPIC provided the expertise that has provided the results we anticipated from the start.”

“We’re glad we had such a great team to work with. The folks at EPIC provided the expertise that has provided the results we anticipated from the start.”
– Pat Evers, Process Improvement Supervisor, Nebraska Furniture Mart–Texas, The Colony, Texas