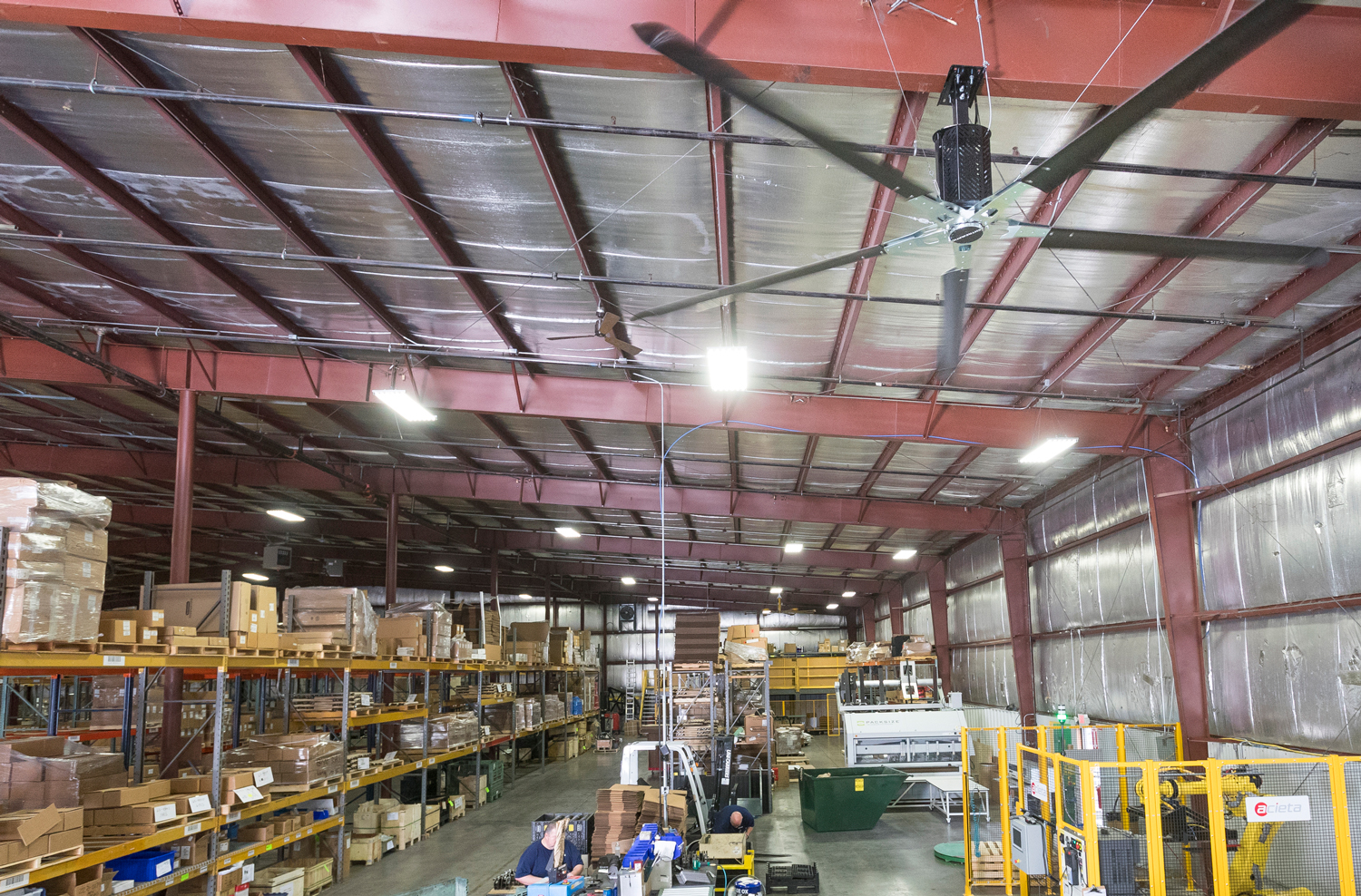 NO MORE CRYIN’ THE “BLUES” ABOUT STAGNANT AIR

Three tenets that Pender, Neb.-based Blue Ox® lives by every day include supporting local parts suppliers, investing in American-made products, and relying on a “less is more” approach to one very important area of its business.

In the early 1990s, the company acquired two businesses, Blue Ox and Duncan Towing. That began the company’s journey toward building a solid reputation as the premier manufacturer in the aftermarket towing industry. Blue Ox has since expanded its product offerings from tow bars to weight-distribution and gooseneck hitches, to carriers for pickups and motorhomes.

Blue Ox operates at 40,000-square-feet combination shipping warehouse and assembly facility in Lincoln, Neb. There, products are sent out to the company’s distributors and dealers across the U.S. The facility also houses small product package assembly for dealer shelves as well as the Blue Ox engineering and marketing teams.

Much more comfortable working conditions for employees with only two fans running at 60% capacity instead of 30 bucket fans. 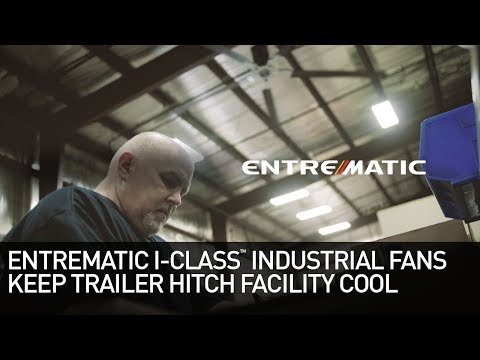 Interestingly, Blue Ox’s new Epic fans weren’t the company’s first experience with an HVLS fan. Blue Ox was already running a fan from another manufacturer in the company’s assembly area.

“The irony behind the third fan in our assembly area is that it provides nowhere near the amount of air movement and performance compared to our Epic fans,” according to Paul Choquette, Operations Manager, Blue Ox. “As a result, we’ve had to set up supplemental portable fans in that work area to keep the air moving.”

A perfect set up

This is now a perfect demonstration set up for IC Energy Solutions, the local company who installed Blue Ox’s Epic fans. “When you stand directly under the other manufacturer’s fan, you can feel airflow, but once you move five to 10 feet away from the fan, you no longer feel any airflow,” added Robb Lierman, General Manager, IC Energy Solutions.

Choquette explained that the air flow from the Epic fans spreads out much farther. He also shared that Blue Ox runs the Epic fans about 60 percent of their capacity, while the company has to run the fan in its assembly area at 100 percent.

“We’ve found that the Epic fans are a big help with humidity levels and really move what would otherwise be a lot of stagnant air in our facility,” emphasized Choquette. “Due to large overhead doors only located on the east side of the structure, the interior can become very stagnant if the wind isn’t blowing the right direction.”

With mornings being cooler during the summer, Blue Ox’s fans also help to keep that cool air circulating throughout the facility. That also helps to maintain a comfortable working environment throughout the day. 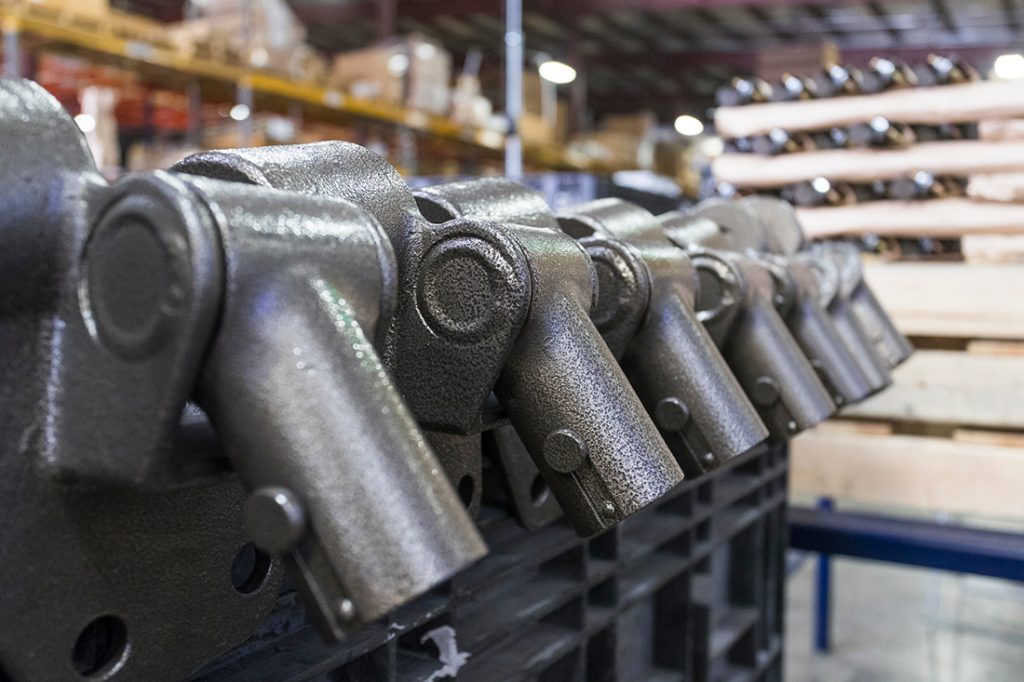 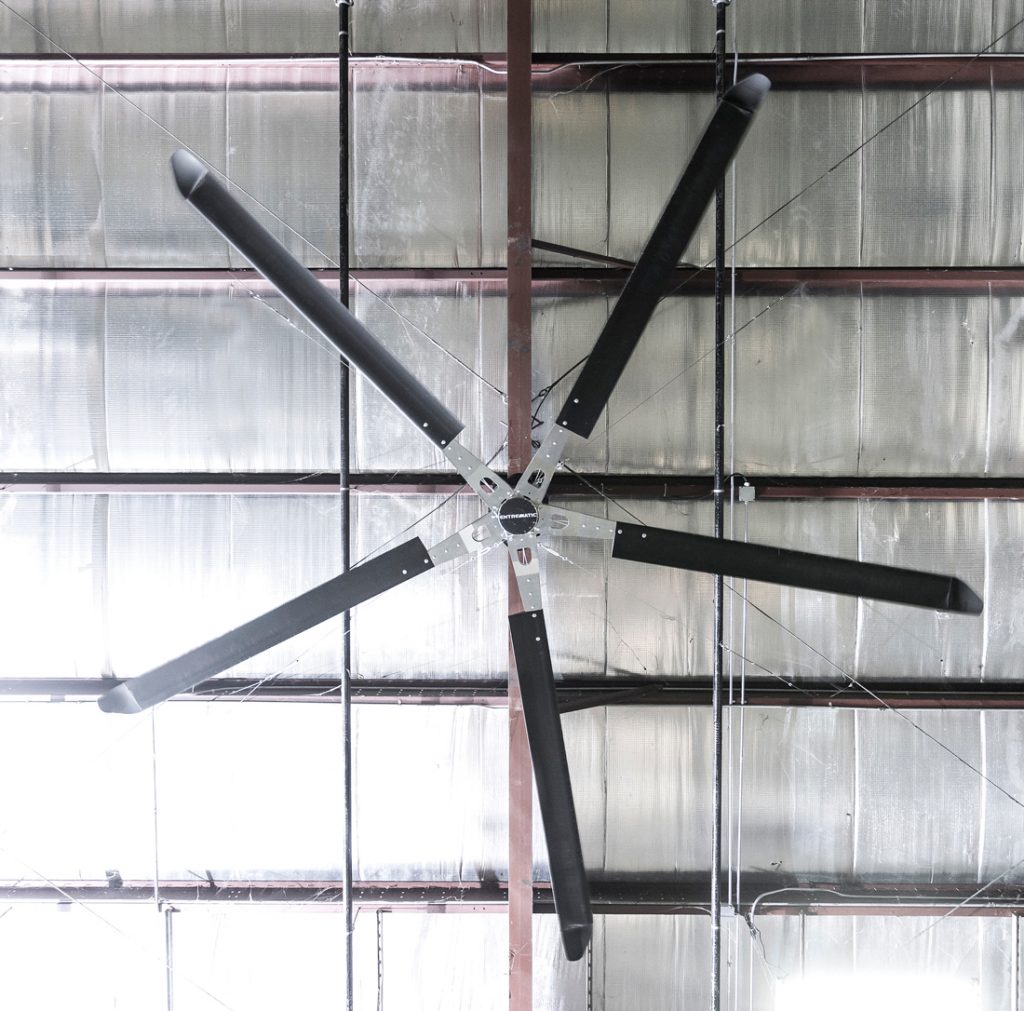 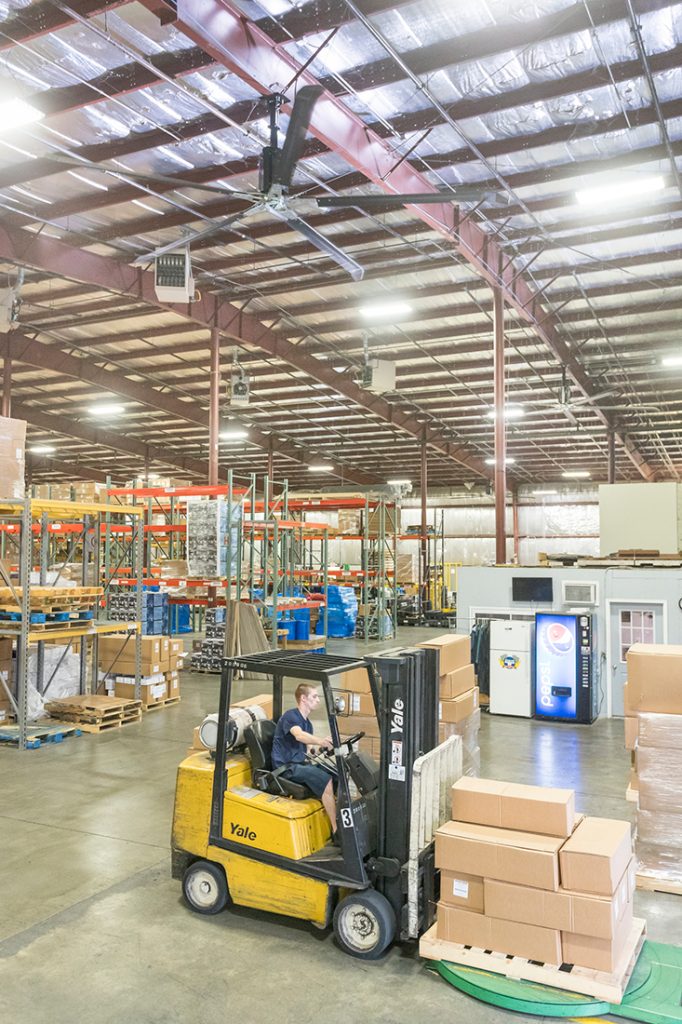 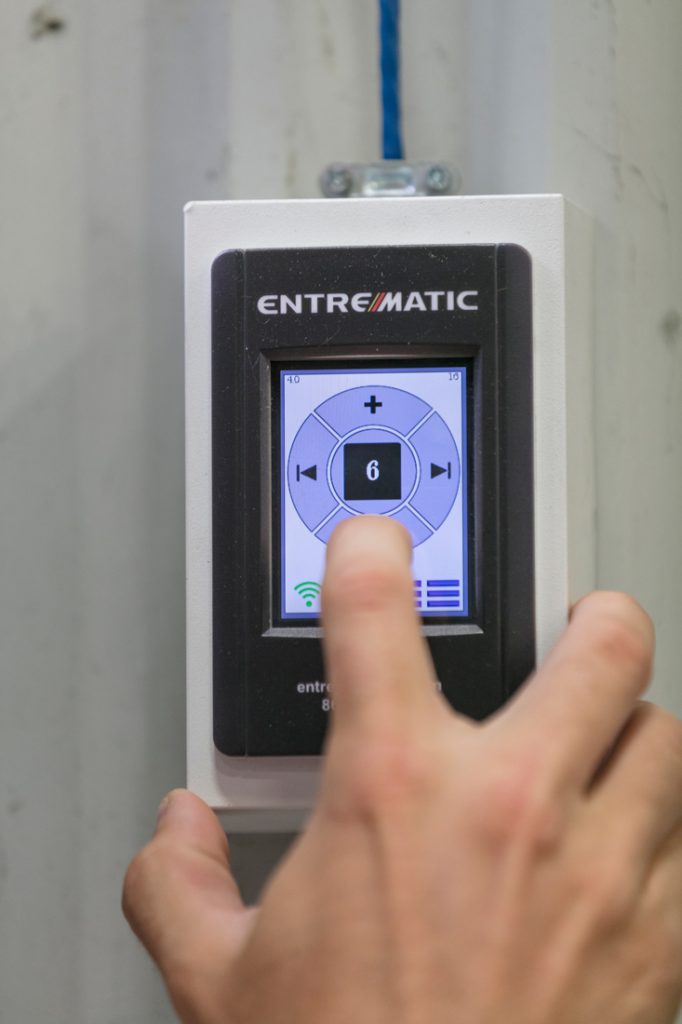 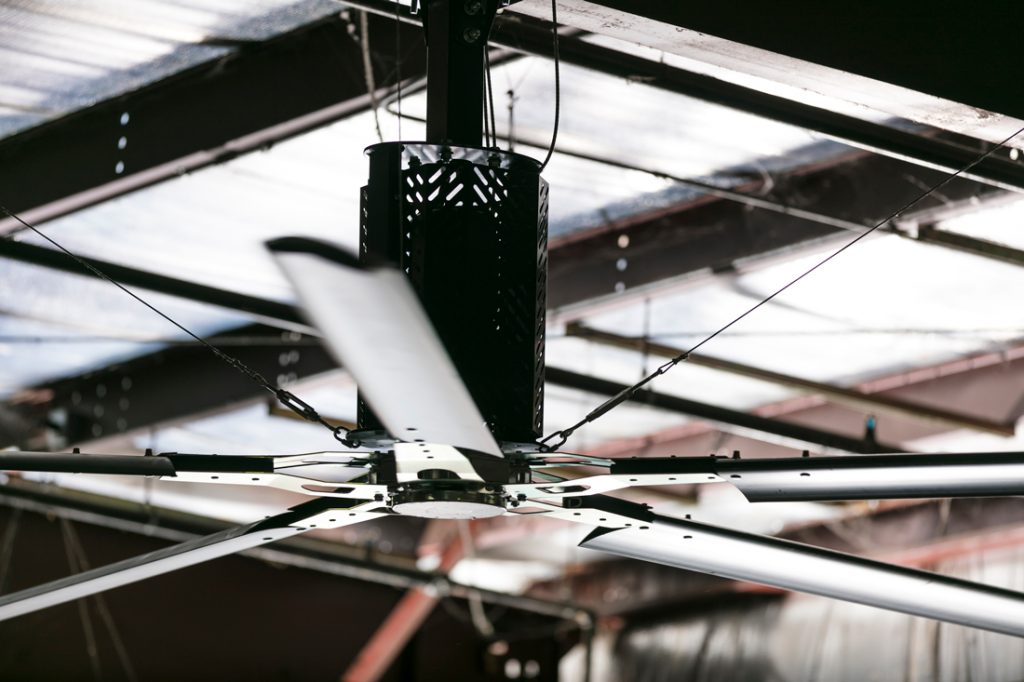 Fans help to destratify air in the winter

Conversely, during cold winter months, Choquette said Blue Ox runs eight propane gas-fired radiant heaters. The fans help push warm air near the ceiling down to the employees where it’s needed most. He added that before the fans were installed, the heaters ran constantly and that the work areas never really warmed up enough. Blue Ox clearly needed a solution to help destratify the air.

“We always had a chill in the air and were constantly battling to keep the facility at an even temperature,” Choquette pointed out, “but with the industrial fans, we now experience a consistent warmth while the fans are running in reverse.”

Choquette, who’s an engineer by trade, said he’s impressed with the design and engineering that goes into EPIC’s fans. He’s also intrigued by how they not only push the air down but far out beyond the fan blade winglets. In fact, he shared that Blue Ox employees often comment on the difference in performance between the two Epic fans and the other manufacturer’s fan.

“I highly recommend Epic fans to any warehouse, manufacturer or large industrial facility simply because they work better than the competition,” commented Choquette. “We know this first-hand because we have both manufacturers’ fans running in our facility to prove it.”

Fan performance is a real motivator

“The companies we install fans for are really motivated by performance,” explained Lierman. “That works extremely well for us because EPIC’s fans definitely are high performance and have the best warranty in the industry.” Lierman added that Blue Ox was originally quoted up to 35 bucket fans from another vendor to help destratify their air. However, when his company recommended installing only two industrial HVLS fans, Blue Ox did not hesitate with its decision.

Lierman said his company is focused on products and equipment that will outperform what’s expected of them. IC Energy Solutions even includes warranties on the products they sell that extend manufacturer warranties. In part, because of his service as an aviation technician in the U.S. Marine Corps, Lierman is devoted to American made products. “Blue Ox sees the value in American made products as well,” Lierman emphasized. “It’s easy to build a relationship when both parties agree on the same goals, including an American made focus.”

With his aviation background, Lierman understands the engineering behind EPIC’s HVLS fan blade and winglet designs and how they work together to provide optimal air movement. “You simply don’t need more blades to move more air like other manufacturers have,” he pointed out. “It might look cool, but the blades just chop up the air. More blades are not better with aircraft either because that affects performance. The same holds true for HVLS fans.”

For more information about EPIC’s Colossus industrial HVLS fan products and features, visit www.entrematicfans.com/industrial, or contact us at 866-349-6108. 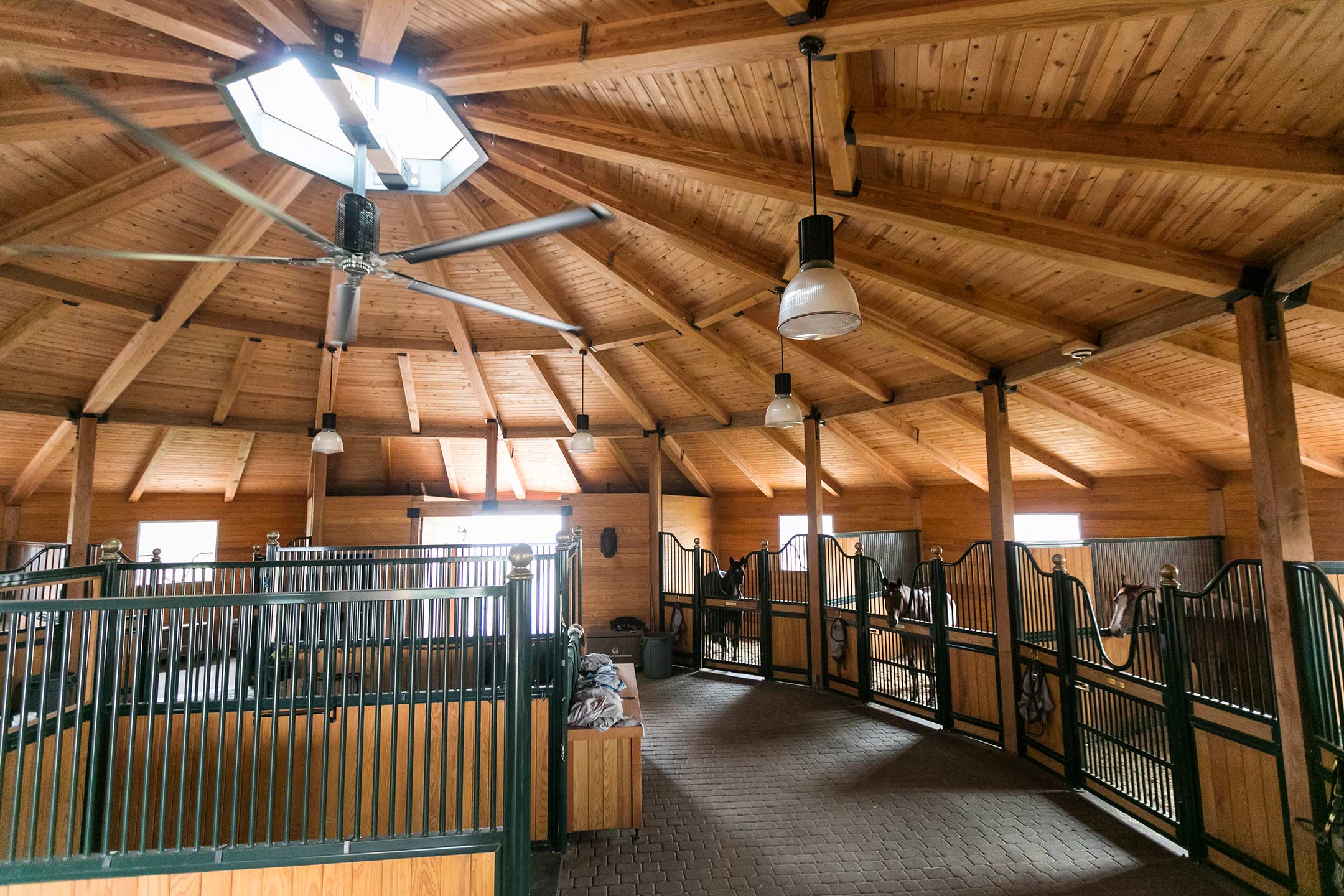