Sometimes in life, one interest leads to another, then another, and so on. Finally, they interconnect so well that they ultimately turn into a way to make a satisfying and rewarding living.

Glenn Patterson, owner of North Texas Helicopters and Aerowestern Helicopters has done just that. His passion early in life for photography and flying airplanes eventually turnedinto an aerial photography and helicopter business that he runs today: one located at a commercial/residential airparkin Justin, Texas and the other at the Double Eagle II Airport in Albuquerque, New Mexico.
Patterson, who has more than 30 years of flying experience,turned his attention from airplanes to helicopters in theearly1990s since that type of aircraft provides more flexibilityfor his clients’ aerial photography needs. He currentlyoperates three turbine helicopters, all Bell Jet Rangers.

“Now that we can keep the hangar doors closed more often, I’ve noticed the fans easily keep the hangar interior 10 to 12 degrees cooler than if we didn’t operate any fans.”

Known as the ‘crane chaser’
His two companies provide a variety of services including,pipeline, utility power-line and game surveys, construction support with lift capabilities, cinematography for the motionpicture industry and even photography for professionalsporting events, such as football (NFL), baseball (MLB) and racing (NASCAR). With FAA Part 135 certification, Patterson also provides his clients charter and air taxi services.

“When I first started flying in the mid-1980s, I thought it would be cool to combine that with my love for photography and use those talents to then help pay for my interest in flying,” Patterson explained

He then added with a humorous twist, “With construction booming at the time in the various metropolitan areas of south Texas, I began to call myself the ‘crane chaser.’” Patterson said his initial plan was to provide monthly aerial photography for construction sites so contractors could visually track the progress of their projects from the air. He’s proud to say that strategy worked out quite nicely.

After initially leasing hangar space for North Texas Helicopters, Patterson eventually decided to build his own 5,600 square-foot hangar seven years ago. Although working in the hangar with its large doors on either end open does keep the hangar interior cool and provide adequate airflow, open hangar doors also mean the accumulation of dust, debris, and insects. 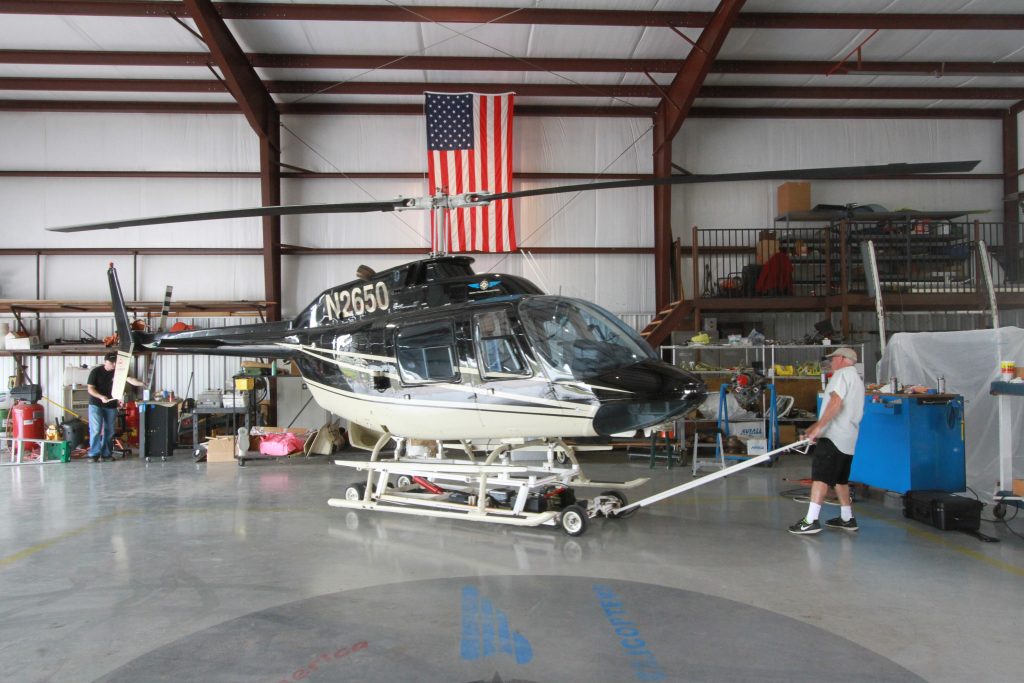 Closed hangar doors only part of the solution
Having put up with such annoying nuisances for several years, Patterson realized that he needed to keep his hangar doors closed as much as possible to alleviate those problems. But that also meant uncomfortable conditions inside the hangar, along with little to no air movement when outdoor temperatures soared. He knew he needed some type of large ceiling fan to provide the right solution.

“Even when winds are not especially strong, the area around the airpark generates a fair amount of dust and dirt that enters the hangar when the doors are open,” Patterson said. “In addition, when we work at night—especially in thespringtime and when the weather’s humid—the inside hangar lights attract a lot of insects.”

He also pointed out the frustration of taking valuable time to blow out and mop the hangar floor one day, and then only two days later needing to repeat the same process. He believes his new fans certainly help to cut down on the amount of time required to keep the hangar clean.

“The fans are centrally located front to back in the hangar right where they need to be to produce the results we need.”

No need for expensive cooling or heating systems
Patterson stressed that although he could have installed 10 high-speed residential-style fans, they would not have provided the volume of air movement he’s experiencing with just two Apex commercial HVLS fans. As a result, he has no plans to spend unnecessary funds to add expensive supplemental air conditioning or an elaborate heating system to the hangar.

Also, to help keep the hangar warm during the coldest winter temperatures, Patterson runs a small heater. When the Apex fans are reversed and circulating the heated air during that time of year, Patterson said he’s noticed a 12- to 14-degree increase in the hangar’s air temperature.

Patterson noted that Epic Fans’ installation process for his Apex fans ran very smoothly. “The fans are centrally located front to back in the hangar right where they need to be to produce the results we need,” Patterson said. “I’ve really appreciated Epic Fans’ guidance on the type and size fan that is best suited for my hangar.” He also emphasized that the entire Epic Fans team “really did their homework” to ensure the fans were installed properly.

Future looks black (and clean)
As for his future business plans, Patterson said he’s working on an additional helicopter for his fleet that he can lease out as what he calls a “floater bird” for television or movie work or other purposes. Plans call for painting the helicopter black since that’s what the television and movie industry prefers. “That way, the helicopter can either be used as a ‘good guy bird’ or ‘bad guy bird’, depending on the graphics that are added to the helicopter fuselage,” Patterson explained.

Either way, the new helicopter will stay nice and clean in North Texas Helicopters’ hangar, now outfitted with its two Apex fans. That is, as long as someone remembers to keep the hangar doors closed