Matthew Gonzales first experienced Texas Horse Park at The Trinity in south Dallas as a subcontractor while working for a local plumbing company during the park’s construction. Not too long after the project was finished, Gonzales landed what he considers his dream job. He became Texas Horse Park’s first Buildings & Grounds Manager/Ranch Foreman.

Opened in 2015 as a 302-acre, state-of-the-art equestrian riding center, Texas Horse Park is owned by the city of Dallas. The expansive pastoral park offers visitors a wide variety of equestrian adventures along with a glimpse into the early days of Texas ranching and farming along the Trinity River. 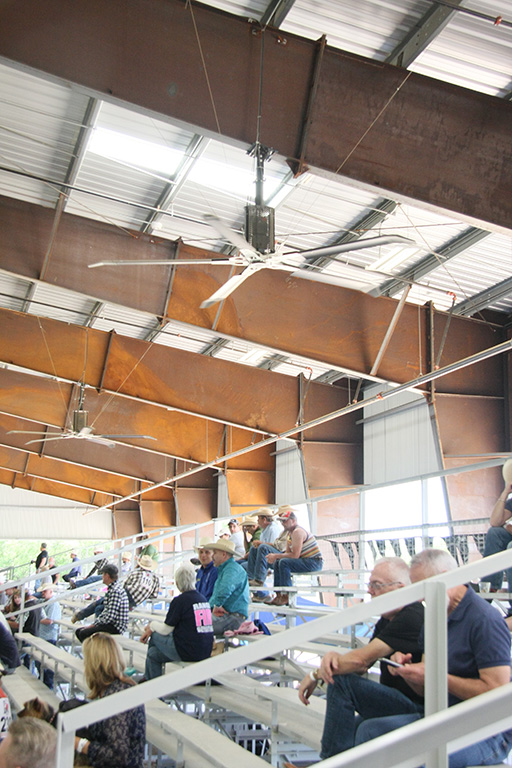 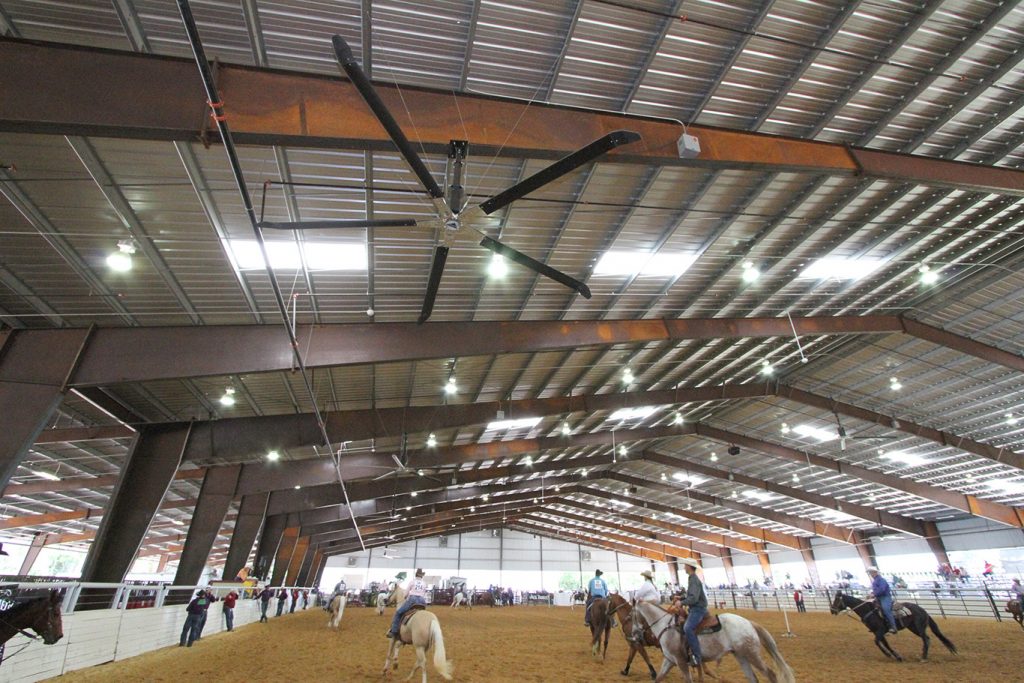 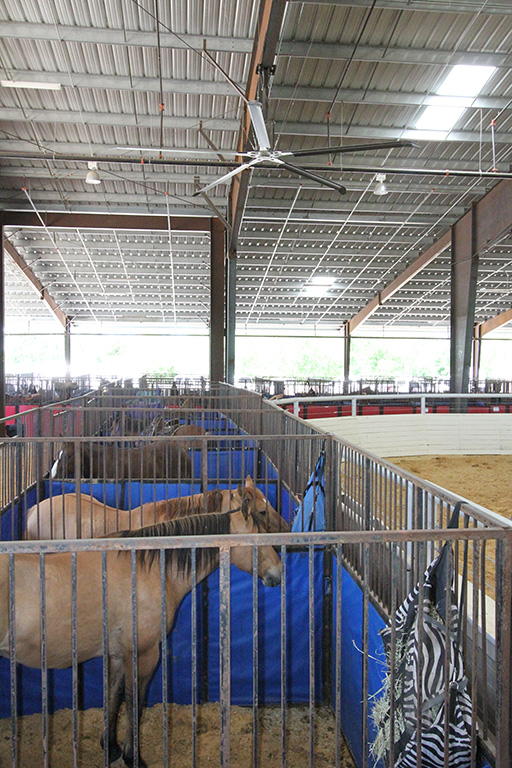 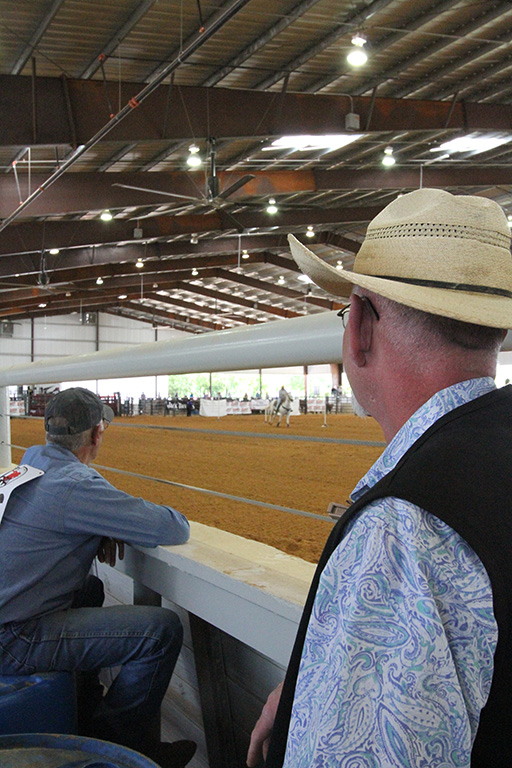 “Our HVLS fans are much larger and more powerful than other industrial fans that I’m familiar with. You really feel like you’re standing under a helicopter when they’re running.”

The equestrian park is operated by two non-profit organizations that are under contract with the city: River Ranch Educational Charities, which provides trail rides, riding lessons, kids’ parties, corporate events, weddings, arena events and other gatherings to the general public as well as scholarships and services for the low-income and special needs communities; and Equest, which provides therapeutic sports riding classes, hippotherapy, as well as programs for active service members, honorably-discharged veterans, and people of all ages and with many types of physical, cognitive and emotional disabilities.

Opportunity of a lifetime
During Texas Horse Park’s construction, Gonzales was instrumental in excavating and setting all of the property’s water, drainage and gas lines. He also worked on installing all of the plumbing for the park’s sinks, various other bathroom fixtures, water heaters and drinking fountains.

Soon after completing his plumbing work—along with the fact that he and his family have more than 30 years of experience producing rodeos, other equestrian events and even working with movie directors and producers—Gonzales started to quickly realize he was standing on top of the opportunity of a lifetime.

He eventually discovered that one of River Ranch Educational Charities’ top goals was to provide the same type of rodeo events at the Texas Horse Park. After a few conversations with River Ranch’s founder and president about his family’s background and expertise in that area, Gonzales was soon hired for his current position.

Consistent comfort in the riding arena is vital
One of Gonzales’ key responsibilities is overseeing the centerpiece of the Texas Horse Park: its 3,200-seat riding arena. At 105,000 square feet, the arena is home to a variety of equestrian and other large-scale events. In addition, Gonzales is charged with ensuring that the park’s patrons remain safe and comfortable during their visit. That’s accomplished in part with 23 16-, 12- and 10-foot diameter Epic Fans high volume, low speed (HVLS) fans.

“The largest of the HVLS fans which we operate in the riding arena are much bigger and more powerful than other industrial fans that I’m familiar with,” said Gonzales. “You really feel like you’re standing under a helicopter when they’re running.”

Even though Gonzales didn’t work directly on the HVLS fans installation, he did observe how the park’s HVAC contractor went about the job. “The fan spacing is perfect around the arena,” Gonzales explained. “I have complete control over the fans as a whole system or individually. You can be anywhere in the arena when the fans are running, and you’ll catch a nice breeze.” Areas inside the arena that are typically stagnant air pockets — even though the open-air arena does benefit from outdoor breezes — receive plenty of airflow from the HVLS fans.

Gonzales emphasized that rodeos in a confined space can be uncomfortable events when high outdoor temperatures combine with large groups of people that are generating a lot of body heat. He added, “I know for sure that pregnant women who attend these types of events definitely don’t like to become overheated, and children especially, become more agitated when they’re uncomfortable. The HVLS fans are a great asset all around for the arena.”

Flexible and total system control
Gonzales explained that he typically runs all of the arena fans simultaneously during events. But via a custom-designed Epic Fans control system, he can also run the fans by zone, such as over the spectator bleachers only. Central to the system is a touchscreen control panel that is mounted in an outdoor location and designed to handle the elements.

He recalls that during one particular arena event, he was asked to turn back the fans over the bleachers because the spectators were getting too cool. He slowed down those fans but kept the remaining fans running at a higher speed over the arena’s performance area. “It’s great to have that kind of flexibility with the fans operating as a complete system,” Gonzales added.

Even though Texas Horse Park’s riding arena is open air, it contains special exhaust fans on the east and west ends of the arena. When needed, the exhaust fans pull hot air out of the top of the arena while the HVLS fans circulate the cooler air below. Gonzales said that when neither the HVLS fans or exhaust fans are running, he has digitally recorded a temperature as high as 110° F inside the arena. With the exhaust and HVLS fans operating together, the fans create a perceived 20-degree temperature difference inside the arena within about 20 to 30 minutes.

For Texas Horse Park’s horses, high humidity levels are a significant concern because horses do perspire more to keep cool in humid weather conditions. “The fans provide a great benefit to our horses and keep them comfortable and healthy as well,” Gonzales emphasized.

“I’m excited about our HVLS fans because I’ve seen first-hand how grateful the general public is that we’ve gone to the effort of installing and providing the fans to ensure their comfort,” Gonzales said. “Because of the fans’ impressive size, they do create a certain ‘wow’ factor and make a positive impression. The HVLS fans benefit the community and encourage our patrons to return over and over again because they know that they’ll be comfortable and well taken care of during the time they spend with us.”