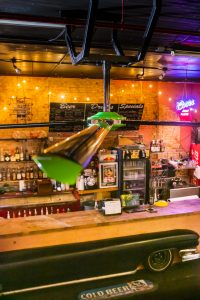 A staple in Springfield, Mo.’s live music scene for nearly 30 years, The Outland Complex features a variety of ever-changing entertainment via three interconnected venues, including its well-known Outland Ballroom.

Local and touring bands traveling between Chicago and Dallas, as well as DJs and stand-up comics, perform for audiences in an environment largely unchanged since it replaced the former Southland Restaurant in the late 1980s.

At the time, the restaurant’s sign was missing the letters ‘S’ and ‘H’, thus, the new complex’s name—‘Outland’—was born.

The connected buildings that make up The Outland Complex tell a varied history since they were originally built in the 1890s. Early uses include a hardware store, feed and saddle shop and even a stint as a theater for early motion pictures.

Located on the second floor of the complex—and the largest of the three venues at 3,000 square feet—The Outland Ballroom not only features the side panel of a ‘59 Cadillac designed into the front of the venue’s bar, but also a brand new, custom-colored 14-foot diameter EPIC Apex™ commercial HVLS (high volume low speed) fan. 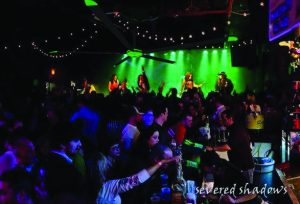 The Outland Complex created the photo above in EPIC’s online Fan Design Center, then posted it to Instagram to enter the EPIC Fanatic Apex commerical fan contest for their venue.

Contest participants were encouraged to upload an image of their space to EPIC’s Fan Design Center to create their perfect fan, and then provide a short explanation of why their space just wouldn’t be complete without a Apex commercial fan.

Kochs said he found out about the EPIC Fanatic contest on Facebook. Ironically—just a year prior to entering the contest—he was on a family vacation when he spotted large industrial fans running in an open area at the airport they were using.

“When I saw those fans, I thought it would be great to have something like that running in our Ballroom. With large crowds, it can quickly become a hot environment,” Kochs related.  “When I discovered EPIC’s fan contest, I said to myself, ‘How cool is that?  Winning one of those would be a dream come true!’”

As a result, Kochs didn’t waste any time sending in his entry. It arrived complete with a photo showing a band performing on his Ballroom’s stage, a capacity crowd enjoying the music in front of the stage and gathered at the venue’s bar, along with a Apex fan in his preferred color scheme hanging directly above.

During concerts and other events, Rose pointed out that the Ballroom gets very warm, even with air conditioning running at full capacity. Crowds of 300-350 concert goers, along with hot stage lighting, all combine to raise the interior temperature to an uncomfortable level. 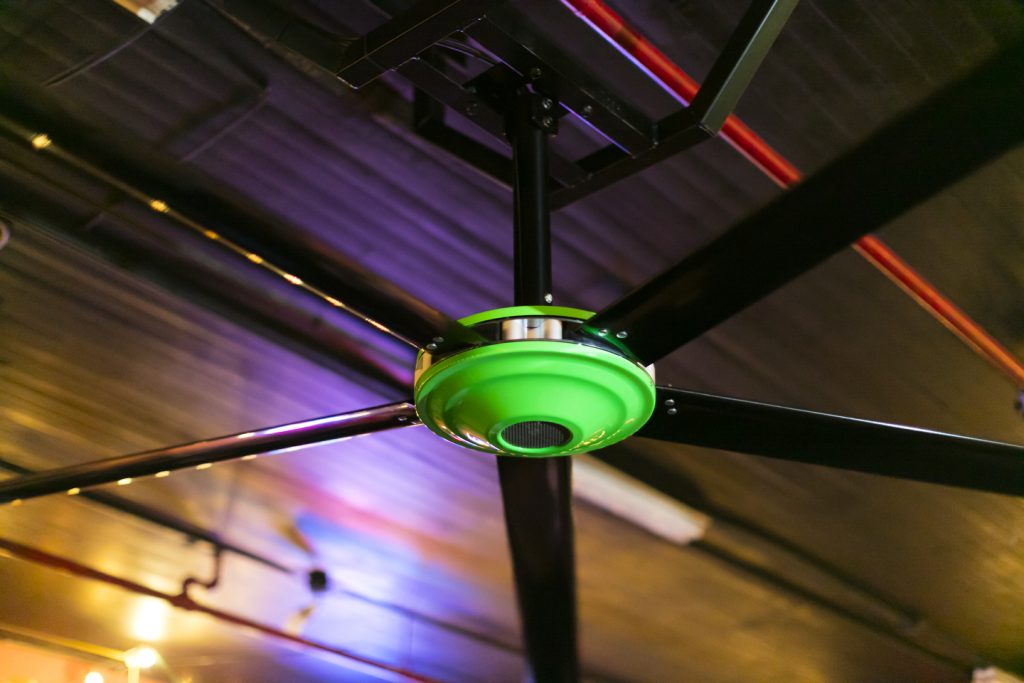 “Now, with the Apex fan, everyone benefits from the moving air, and not just two or three people immediately in front of a stand-up fan.”  –Jimmy Kochs, Co-Owner/Partner, The Outland Complex, Springfield, Missouri

“We’re very sensitive to how comfortable of an environment we try to provide our bands and patrons,” Rose emphasized. “Treating our bands well is what keeps them coming back.  When summer temps soar into the 90s and beyond during the summer, it can get quite hot in our upstairs Ballroom.  And, we definitely want to prevent anyone from becoming overcome from heat stroke as a result.”

The Outland Complex’s owners determined that the Ballroom needed a better solution for air movement to supplement the complex’s air conditioning.  Up until installing their new Apex fan, they had been relying on renting, and even buying, several stand-up fans.  They weren’t satisfied with the results.

Rose said that the fans were noisy, costly to operate, took up a lot of space and didn’t move air the way he wanted.  Safety issues, such as cords and the risk of fans being knocked over, were also a concern.

Even with stand-up fans running, Kochs shared that negative comments about uncomfortable temperature conditions in the Ballroom would periodically appear on the business’ own Facebook page.

Kochs and Rose both agreed that when outside temperatures reach 100° F or more, air conditioning in the Ballroom works hard to just maintain the inside temperature at 75° F.  However, once the doors open and the crowd grows, the temperature inside starts to build well beyond that point.

“Patrons in front of the stand-up fans just blocked the air flow anyways, so that was a real problem too,” Kochs added. Now, with the Apex fan, Kochs said everyone benefits from the moving air and not just two or three people immediately in front of a fan.

Rose said that visitors to the Ballroom might think the fan should be closer to the stage.  But due to various fire sprinkler heads and the ceiling height at that location, it made more sense to install the fan over the Ballroom’s bar area.

“Patrons eventually leave the stage area at some point to stop at the bar before, during and after concerts, so the fan being directly above really helps them stay cool even more once they get away from the hot stage lights,” Rose added.

“Under black light especially, the fan really makes a strong visual impact,” Rose pointed out. “It actually looks a lot like a spaceship when it’s spinning which is a really cool effect above the bar area.”

Rose said he and his partners are impressed with how quietly the fan operates.  One added benefit for the sound board operators is that they no longer need a noisy fan running nearby to stay comfortable. The Apex fan takes care of that.

Kochs said he’s continuously intrigued with how much air is moving while the fan moves so slowly, adding that’s probably because he’s so accustomed to the high RPM stand-up fans.  In fact, Kochs and his partners love the Apex fan so much, they’re even seriously considering a second fan for The Outland Complex’s lower level.

“Once we found out we won the fan contest, everything moved quickly from the point we ordered the fan through delivery and installation,” Kochs said.  “Even though we initially thought we would need the largest fan available, EPIC helped us determine just the right size fan based on our space.”

At The Outland Ballroom, one EPIC Apex commercial fan operating in one highly popular concert venue has made a world of difference for both business owners and patrons alike.